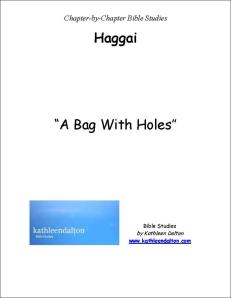 Haggai.  When the people of Israel first arrived back in their land after their captivity in Babylon, they were full of desire to do things God’s way.  They immediately began to rebuild the temple – the place they could worship the One, True God and show the rest of the world what He was like.

But they ran into difficulty as they rebuilt.  They had enemies who did not want them to make the temple and their land great again.  And the people who had such great aspirations to once again live for God were discouraged…so they stopped working.

They were in their land, though.  So they built houses for themselves.  And planted orchards.  And worked hard to live life.  The work of God was put on hold…and all the wealth they gathered kept slipping away from them.  Nothing was right.

The book of Haggai is the story of the man who put them back on the right track again…by telling them:  “Think about what you are doing.  Is this really the way you want to live?”